The construction of a railway line is a multi-step technological process which is crowned with the possibility of launching efficient and safe railway traffic. Its complexity is influenced by many elements, the implementation of which sometimes requires almost clockwork precision from the contractor. A task of this kind is the construction of the exhibition platform at the Gdańsk Zaspa Towarowa station, performed by TORPOL S.A. as part of the project “Improving railway infrastructure access to the port of Gdańsk” – construction works on line 227/249 including the Gdańsk Zaspa Towarowa station and line 722.

The exhibition platform is a particularly important place during the TRAKO International Railway Fair in Gdańsk, where the latest machines and rolling stock are presented. The venue should provide visitors with easy and safe access to the exhibition, while at the same time enabling the exhibitors to position it efficiently and emphasise the uniqueness of the equipment on display. After many years the Gdańsk Convention and Exhibition Centre AmberExpo has finally had a project for a modern exhibition platform that meets the requirements for such facilities. The huge construction, unique in Poland, will replace the platforms and paths between the tracks used so far for that purpose.

The newly-built exhibition hall can be compared, in a nutshell, to a large jigsaw puzzle, where the individual pieces have to be put together to achieve the desired effect. The entire structure, which is about 303 m long and covers an area of more than 6,000 m2, is essentially divided into a track section and an intertrack section. Each of these is made up of a number of smaller slabs that form a whole. There are 4 tracks crossing the exhibition platform, where 117 panels are provided for each track and each row of intertrack space. There are 10 rows in total, so the whole exhibition platform will consist of as many as 1170 individual slabs, each of which weighs from 3 to almost 6 tons.

The construction appears to be simple, so why is the project unique? Firstly, the tracks in the exhibition platform run both straight and in curves, which means that we have variables in the intertrack at almost every point on the curve. So each intertrack slab has its own individual dimension and can only be laid in the right place. To streamline the process of their installation, the corners of each slab were described in the x, y, z coordinate system, and the track slabs were additionally marked along the track axis. The whole is laid on a previously prepared and properly compacted layer of stone subgrade mix covered with a layer of refined stone grit. The surveying team specially compacted the grid and by constantly measuring both the height of the grit and the height of the laid slab, it was possible to maintain an accuracy of just under 1 mm. This task required extreme precision and experience. After the slabs had been laid, they were stabilised by filling the joints with semi-dry concrete and a special elastic material to dampen vibrations, as well as covering them with a special coating to prevent the absorption of impurities.

Secondly, a linear drainage system has been installed between the inter-track slabs to drain water from the entire facility. In addition, special drainage channel panels have been installed every 100 m in each of the tracks to collect water from the rail channels. At the start and at the end of the exhibition platform, drainage gutters have also been mounted to the track slabs, which will additionally collect water from the rail channels. There is an important detail to be noted in the design of the drainage, which is particularly important for female visitors to the fair. This is the so-called high-heels test, i.e. the selection of appropriately small water-collecting slots in such a way that a woman wearing high-heeled shoes would not fall into them.

The final element in the construction of the exhibition platform was the thorough cleaning of the rail channels and the installation of the previously welded rails in them, with a length of about 360 m, without damaging any of the slabs during this operation. When inserting the rail, special attention also had to be paid to the location of the welds, as they could not be located at the point where the rail was fastened to the plates, but between them. After fastening, the rail channels were filled to the correct height with fine grit and vibration-damping material.

The effects of our work can be seen during the 14th edition of TRAKO International Railway Fair, which will be held on 21-24 Sept. 2021. 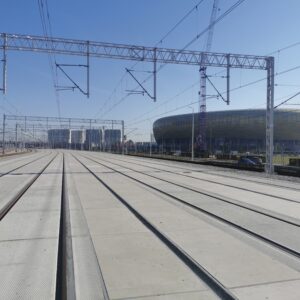 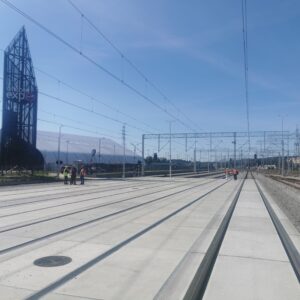 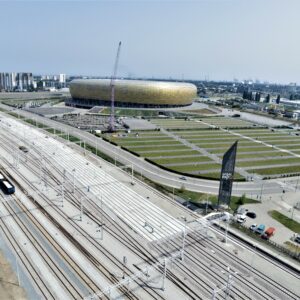 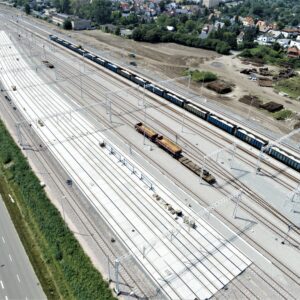 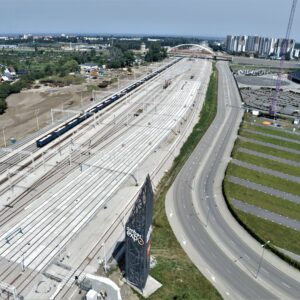 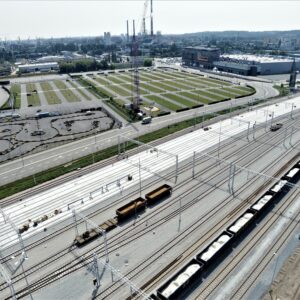 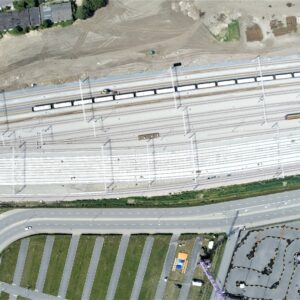 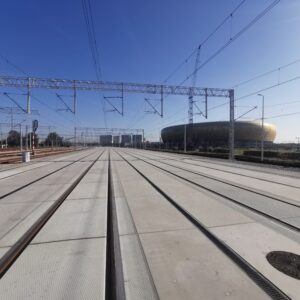